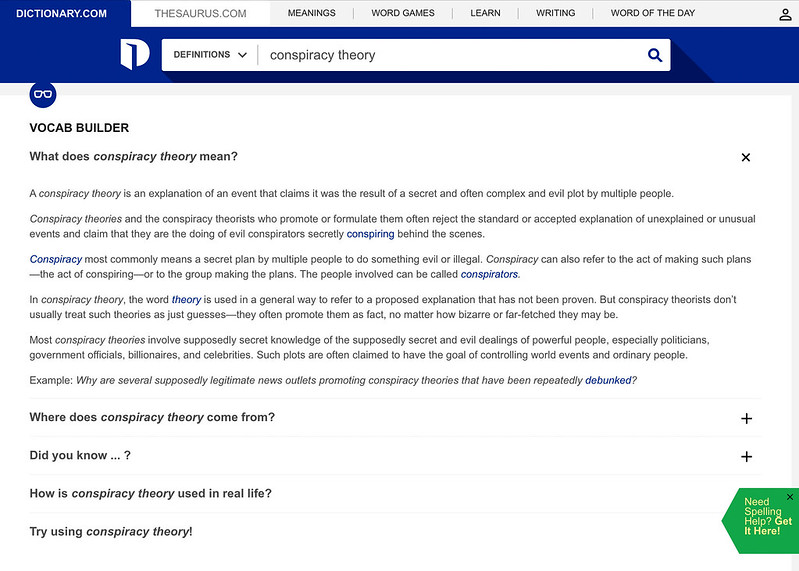 Here are a few things that dictionary.com has to say about conspiracy theories:

A conspiracy theory is an explanation of an event that claims it was the result of a secret and often complex and evil plot by multiple people.

Conspiracy theories and conspiracy theorists who promote and formulate them often reject the standard or accepted explanation of unexplained or unusual events and claim that they are the doing of evil conspirators secretly conspiring behind the scenes.

Conspiracy most commonly means a secret plan by multiple people to do something evil or illegal.

In conspiracy theory, the word theory is used in a general way to refer to a proposed explanation that has not been proven. But conspiracy theorists don’t usually treat such theories as just guesses – they often promote them as fact, no matter how bizarre or far-fetched they may be.

Most conspiracy theories involve supposedly secret knowledge of the supposedly secret and evil dealings of powerful people, especially politicians, government officials, billionaires, and celebrities. Such plots are often claimed to have the goal of controlling world events and ordinary people.

It is shocking to see the number of Christians embracing conspiracy theories over fact-based knowledge and events in the face of a worldwide pandemic. Bottom line, participating in such folly is akin to spreading gossip and lies. Anyone claiming to have “secret knowledge” should put you on high alert, especial when the only “facts” given to support an assertion is the assertion itself. [It is reminiscent of Gnosticism which has been around for ages.]

Preach the word; be ready in season and out of season; reprove, rebuke, exhort with great patience and instruction. For the time will come when they will not endure sound doctrine; but wanting to have their ears tickled, they will accumulate for themselves teachers in accordance to their own desires, and will turn away their ears from the truth and will turn aside to myths. 2 Timothy 4:2-4 (NASB)

« there is a time to be silent, a time to meditate in silence & a time to speak voter fraud in our upcoming election [conspiracy theory] »