I know that words matter – we are influenced by them and in turn influence others by what we say. I wrote a faithbooking lesson on this topic more than a decade ago when I shared a story about our old neighbors – “Jeffrey Dahmer” and “The Mole People.”

These were nicknames I had come up with for the neighbors living next door to us based on behaviors I had observed; I not only referred to them that way in our own home, but in conversation with other neighbors. This went on for months. When I finally met “The Mole People” in person, I discovered they were sleep-deprived parents with a newborn (the reason they were always inside with blinds drawn). It turns out Tony and I had a lot common with them and we became friends shortly before our move to Rosemount. I tried telling the other neighbors about my name-calling mistake but the damage had been done. My words had influenced others to believe the worst about our next-door neighbors and it stuck.

After becoming a Christian, I learned about the power of words from a biblical perspective:

Whoever guards his mouth preserves his life; he who opens wide his lips comes to ruin. Proverbs 13:3

I tell you, on the day of judgment people will give account for every careless word they speak. Matthew 12:36

Out of the overflow of the heart, the mouth speaks. Matthew 12:34

There are six thing the Lord hates, seven that are detestable to him: haughty eyes, a lying tongue, hands that shed innocent blood, a heart that devises wicked schemes, feet that are quick to rush into evil, a false witness who pours out lies and a person who stirs up conflict in the community. Proverbs 6:16-19

A fool gives full vent to his spirit, but a wise man quietly holds it back. Proverbs 29:11

I think it’s pretty safe to say this applies whether words are written or spoken. I share this now because I have really been struggling with words I am seeing and hearing from our president. 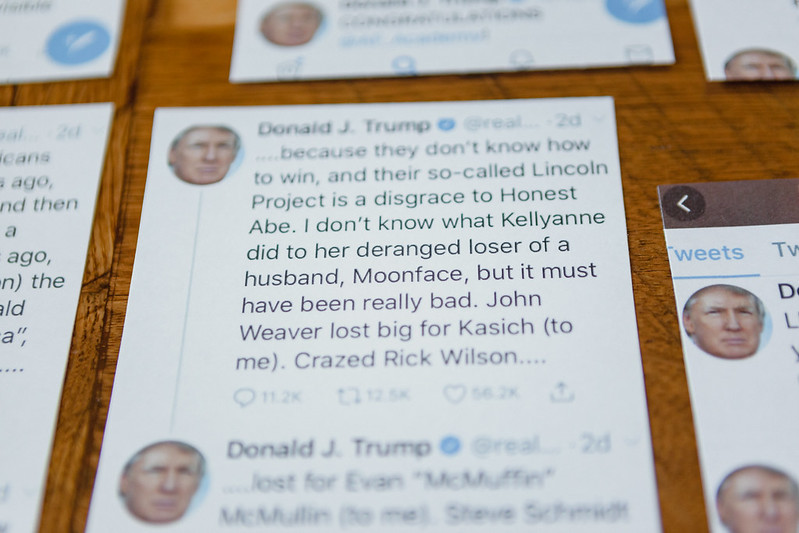 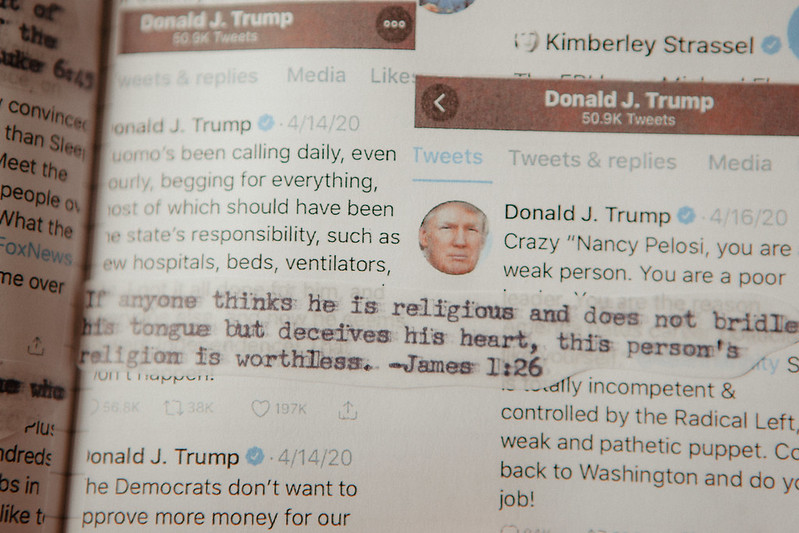 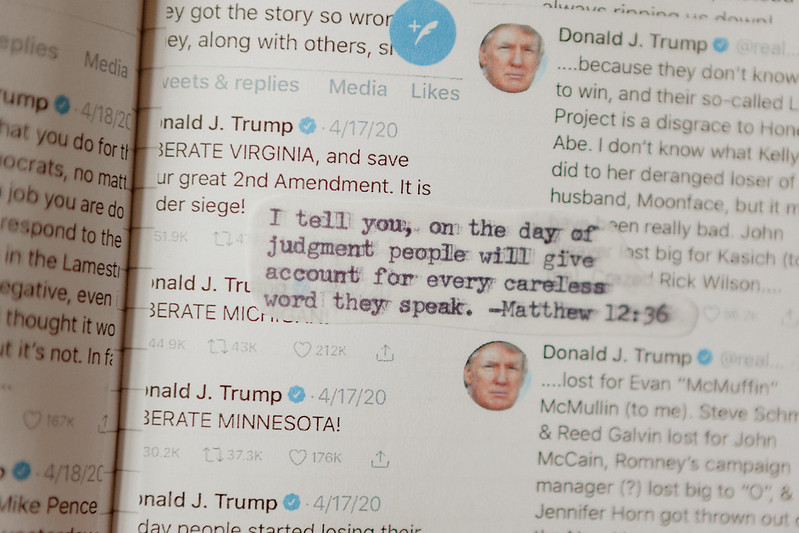 And as I learned for myself in the lesson with our neighbors, this is wrong. It is not cancelled out by the wrongdoing of others, nor is it erased by good behavior, good intentions, or good deeds. I spent decades making excuses for my own behavior before realizing I desperately needed the saving grace of Christ. [The only way out from this stuck way of living is salvation which requires confession, repentance, and transformation as the natural progression.]

I still mess up but can no longer make excuses for my poor behavior, actions, and words. I lean into the above process over and over again asking God to shape me into someone who looks more like him.

None of us has this thing all figured out and all of us are right about some things and wrong about others. I value freedom which allows for differing thoughts/opinions and believe there is much we can learn from each other. That being said, in my own pursuit of truth early in the pandemic I printed up the president’s tweets and spread them out on my table.

And the pattern it revealed was unmistakable. As a born again, bible-believing, Jesus-loving Christian I am concerned about the church’s involvement and backing of Donald Trump, specifically its impact on those who do not yet know the Lord. Plain and simple, I struggle to see how any of this glorifies God. My call is to love God with everything I have (heart, soul, mind, and strength) and to love my neighbor as myself. Love is a feeling that expresses itself in action – showing tenderness, compassion, and sensitivity. If this is the case, what am I radiating? Do my actions line up with my words? What am I doing to encourage those around me? Things to think about over the coming weeks and beyond.

You are not the same as those who don’t believe. So don’t join yourselves to them. Good and evil don’t belong together. Light and darkness cannot share the same room.
2 Corinthians 6:14